I’m not sure when Corporate culture became a thing – it certainly goes back to the eighties; you could spot IBM employees from 100 metres away, the confident swagger, fresh-pressed clothing and overt conversation.

Somewhere along the line ‘we all fall into line’, well, actually, no.

I predict the next big movement will be ensuring personal identity is built into and supported by corporate culture.

This will be a ‘thing’ because increasingly companies are realizing they need all manner of personalities and styles to make their company hum and high turnover of staff in any single area is a significant problem. If, however, they can embrace differences in individuals while integrating the corporate culture and company objectives then rewards will follow for everyone.

In the early stages of my own career, I was wooed by employers who thought the best way to retain my services was simply to pay more. The answer to keeping me happy was much more complicated – the mentoring I craved and the engagement I sought with senior management was most of what was required.

I stayed with and worked hardest for those where my identity was strongest – provided the basic culture was aligned with my values in the first place – though mostly I expect those things to go hand in hand (if the ‘outside appearance of the culture of a company doesn’t align with your values, don’t go there).

If you believe in your staff you need to feed them, and when you do, be aware that while some want steak and chips others want flowers or simply someone to listen to them. Almost anything can actually be accommodated with all but the very worst of corporate cultures and/or employees if you just take time to lean in and learn.

Collectively the individual identities in your organization will always be bigger, stronger and more enduring than your corporate culture, just imagine the strength of what that would create if they could all fit together in a dynamic ‘living’ organization.

I realise blogging about courage is an act of courage in itself!

Mostly I think courage is when we do anything where we are the initiator of that action.

Courage can range from accepting fate through illness or injury, to doing something for the very first time – for children that might be tasting a new food (actually that would be the same for some adults I know too!).

Under such a definition the vast majority display courage every day.

So to display courage is not extraordinary, though as leaders we could do a lot better at recognising it and supporting it.

But then there are the courageous. These are the people who display courage on a daily basis – perhaps by the hour – “Big Kahunas” as I have had remarked to me recently :).

Within the ‘courageous’ there is also an important distinction to make. It would be easy to say courageous people are therefore leaders, but this is not always the case.

I know some great sportspeople and athletes, and when involved more heavily myself it was perhaps the more courageous ones I least wanted to be like. They lived in their own world and expected the world to laud over their achievements. For me they were self-centred and ungracious and generally far too egocentric at one level at yet often insecure at another. (As an aside it was interesting reading multi-sport legend Steve Gurney’s recent book – Lucky Legs – and the personal and soul searching journey he endured after ‘retiring’)

Courageous leadership requires you to be focussed, hungry and determined, no doubt about it. However it is always a team ‘sport’.

Without a team of developing leaders under a leader then it is odd to think they could consider themselves a ‘leader’. I wonder who comes to their parties and celebrates their success. I wonder if they even have success. Perhaps they are the only ones to believe their own press?

These are the un-courageous of our organisations. The ones who hide behind systems and procedures, who stall progress, suppress talent, blame others, and generally do all they can to protect the status quo as it concerns them.

May the truly courageous survive them, have the strength of self belief and the camaraderie of communities like this blog to know that right ‘is right’ and sharing your gift, your view, your energy is your calling.

Keep changing your world. This is a (the only?) way for courageous potential to get out and make that difference. Encourage others to be courageous and demonstrate true courageousness in leadership.

Courage is not enough, be exceptional. 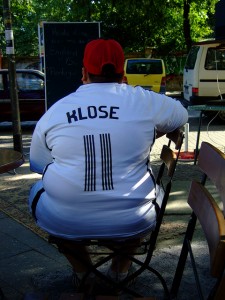 The football world cup has been interesting to casually observe. Other than playing socially, football has never enthralled me. Now with the world cup I think I finally understand why it attracts so many people as fans and spectators.

The skills of the premiere players are quite remarkable, but importantly games can go ‘any way’ and more so than most of the other major codes. This is also why England’s FA cup works- the underdog really can go all the way – and not infrequently they do.

What continues to attract me to sports however is the mental edge. Belief in ‘superiority’ has as much to do with a players/teams conquest as their skills. Golf is a classic illustration of this, and cricket is not far behind (strangely I have little patience for either as a player).

The Football World Cup demonstrates the mental set-up of underdog (nothing to lose) vs favourite (everything to lose), and in part this explains New Zealand’s ‘success’’ (well we didn’t lose).

So here is my punt for the future:

Any small country can produce top quality sports people and top quality teams and in any code. A country of 4 million can compete with a country of 400 million.
The professional sports platform has meant boundaries are no longer confined and a player base of only a few thousand in any country should be sufficient to get anyone off the ground and into the stratosphere in any code.
There is nothing to support that any one country has some pre-destined or hereditary right to having a distinct mental and physical edge over another. It is simply the application, discipline and belief that gets them across the line.

1. commercial, and
2. the realisation of individuals that it matters not where you are brought up

What has this got to do with leadership?

• Hone your mental edge, don’t rely just on functional/tactical skills.
• The boundaries of leadership are changing. Don’t assume what’s defended you in the past will protect you in the future.
• Seize the opportunity to think global, if you or your products can thrive here you can thrive anywhere. Don’t limit yourself.

The hidden gremlin – why the wrong upbringing can unwind the right talent.

I reject the notion that we all have “our station in life”. At its worst this is hugely demeaning and limiting.

It did make me think though of the environment we were bought up in, and the impact this has on the way we see ourselves in life. And what I discovered was an aspect no-one in 5 decades has pointed out to me.

As you grow you may ‘improve’ your environment through diligence and effort; but you also need to believe you belong in that new environment before you can realise your dream/ your potential.

As a child it was an exciting day when Ray Sadd the plumber would come around and smoke his roll-your-owns on our back porch.

This was my model of ‘company’, of belonging.

It was entirely incongruous with my other aspirations.

To make progress I had to reframe where I belong much more than understand what I needed to do to get there.

One part of this journey was obvious (Academic you might say), the other incredibly subtle.

That is, if as a child you dream of being a world class football player, you need to dream not only of having the skills and the mental ability but also of being comfortable in the company of the stars you currently idolise.

I know the two characters recently gracing international TV screens and Newspapers dressed as Kiwi’s at the football world cup. They are tremendously at ease mixing with media ‘stars’ and footballers alike. They were brought up in a highly supportive environment where anything was possible, where in effect they were ‘taught’ to feel as though they belonged wherever they went and in whoever’s company they made. They have gone far and will go further.

I am sure we have many talented people falling off the radar because although they may have developed the ‘skills’, training and even career path of a leader, there may be a little voice saying “I don’t belong”.

How many times have you been told by an employer ‘you belong here’? Here being at this level, in upper management, onward and upward. Not many of you I expect.

Maybe, just maybe, this is a missing piece in the career and talent development framework.

We not only need to grow skills and experiences but we need to ensure the individual understands they truly belong. The sky is the limit.[pullquote]they were ‘taught’ to feel as though they belonged wherever they went and in whoever’s company they made.[/pullquote]

The lucky ones already know this. They believe they belong and develop the requisite skills and experiences to fit alongside this. I would hazard a guess that this is as much an influence on future success as any other factor. Perhaps the ‘fortunate and wise’ relay not the skills for future ‘wealth’, but simply the sentiment of belonging and a rightful place.

Does this resonate with anyone?

Do you have talent in your company which is not being realised because of this simple factor?

What do you think about this proposition?

Just now for the briefest of moments I felt like Malcolm Gladwell or Stephen Levitt. I unwittingly conducted a social experiment which told me way more than I expected.

The experience was such a success I’ve parked the blog I had lined up and gone for a playful theme.

I’ve actually found what success looks like and at the same time discovered that it looks nothing like happiness.

How did I do this?

Well, learning from the better blogs around, including the crafty blogs my wonderful wife follows (like Sew Liberated, Tiny Happy) I realised I needed to put a bit more life into my blog with images and colour, try to show that I have both imagination and style, and perhaps even a little bit of soul.

I went looking for free images on the web and found this site which appealed due to its curious name MorgueFILE.

So what did I search for?

Mostly these were hohum results but I started to get an idea so I did two consecutive searches:

had page after page of bank notes, American dimes and silver dollars.

Is society really that strongly conditioned?

And maybe that is the clue right there.

Happiness is success, but success, as society traditionally measures it, is not happiness.

Indeed it is the tension between happiness and the traditional notion of success which tears at us much of the time.

For they are intertwined. Probably the original and enduring chicken and egg dilemma.

How do you work with this tension?

What does each mean to you?